Ice dams can be prevented by controlling the heat loss from the home.

What is an ice dam?

An ice dam is a ridge of ice that forms at the edge of a roof and prevents melting snow (water) from draining off the roof. The water that backs up behind the dam can leak into a home and cause damage to walls, ceilings, insulation, and other areas. Figure 1 shows a cross section of a home with an ice dam.

Since most ice dams form at the edge of the roof, there is obviously a heat source warming the roof elsewhere. This heat is primarily coming from the house. In rare instances solar heat gain may cause these temperature differences.

Heat from the house travels to the roof surface in three ways: conduction, convection, and radiation. Conduction is heat energy traveling through a solid. A good example of this is the heating of a cast iron frying pan. The heat moves from the bottom of the pan to the handle by conduction.

Another example of radiation is to stand outside on a bright sunny day and feel the heat from the sun. This heat is transferred from the sun to you by radiation.

There is another type of convection that transfers heat to the attic space and warms the roof. In Figure 1, the winding arrow beginning inside the house and going through the penetration in the ceiling, from the light to the attic space, illustrates heat loss by air leakage. In many homes this is the major mode of heat transfer that leads to the formation of ice dams.

Exhaust systems like those in the kitchen or bathroom that terminate just above the roof may also contribute to snow melting. These exhaust systems may have to be moved or extended in areas of high snow fall.

Other sources of heat in the attic space include chimneys. Frequent use of wood stoves and fireplaces allow heat to be transferred from the chimney into the attic space. Inadequately insulated or leaky duct work in the attic space will also be a source of heat. The same can be said about kneewall spaces.

So it is primarily heat flowing from the house that is causing the nonuniform temperatures of the roof surface leading to ice dams. 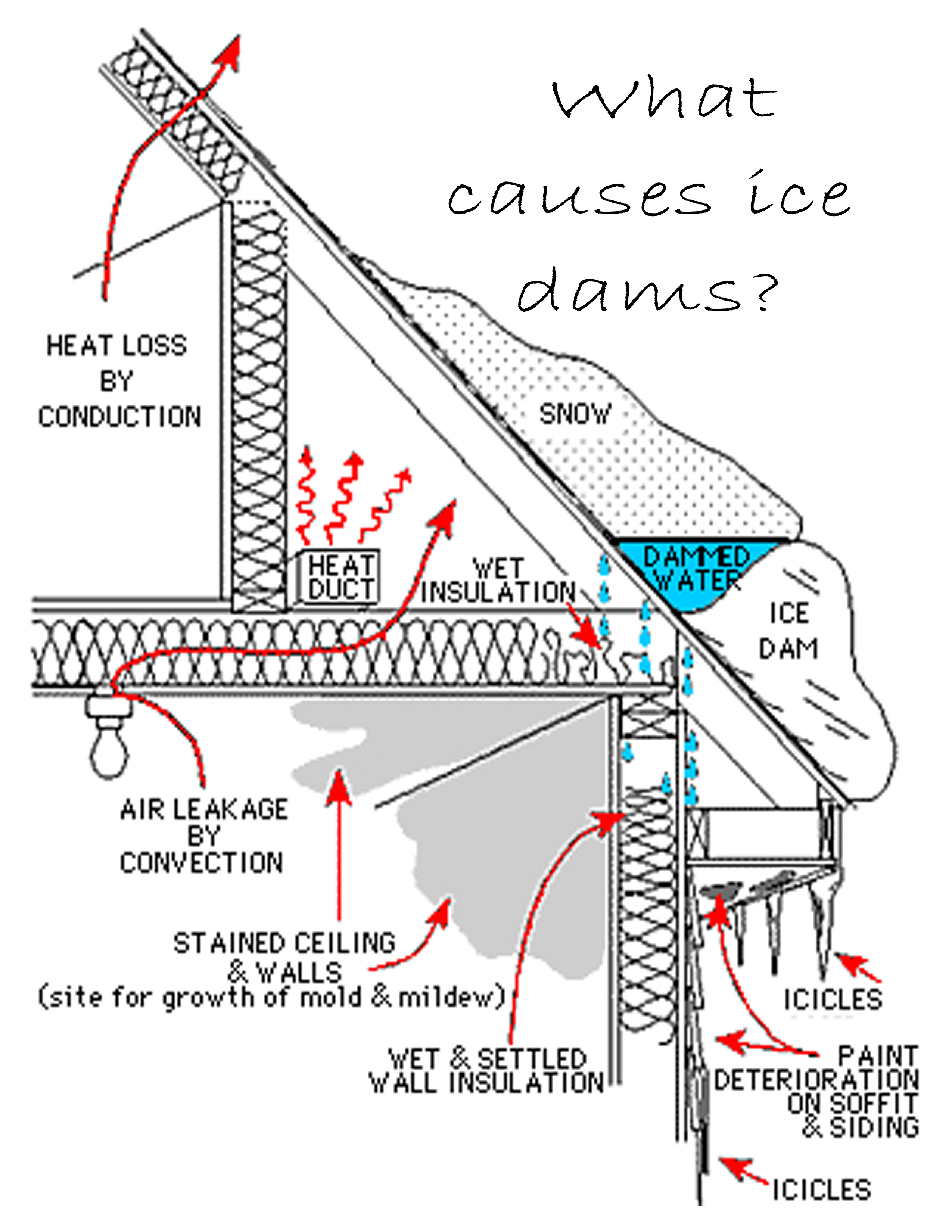 Don’t let other companies convince you that a regular hot water pressure washer will work as well as The Steamer. While high pressure is sometimes appropriate for melting ice from sidewalks and parking lots, it can cause damage to shingles and roofs. Also, our steamer operates at the optimal temperature of 290°F, which results in less water runoff, faster ice removal, and an overall cleaner ice dam solution.

The dam grows as it is fed by the melting snow above it, but it will limit itself to the portions of the roof that are on the average below 32°F. So the water above backs up behind the ice dam and remains a liquid. This water finds cracks and openings in the exterior roof covering and flows into the attic space. From the attic, it could flow into exterior walls or through the ceiling insulation and stain the ceiling finish.

After ice removal, proper insulation and ventilation is needed to prevent future ice on your roof. Take advantage of $700 instant rebate if you have less than 6 inches of insulation.

Schedule an Appointment for a Free Inspection & Estimate